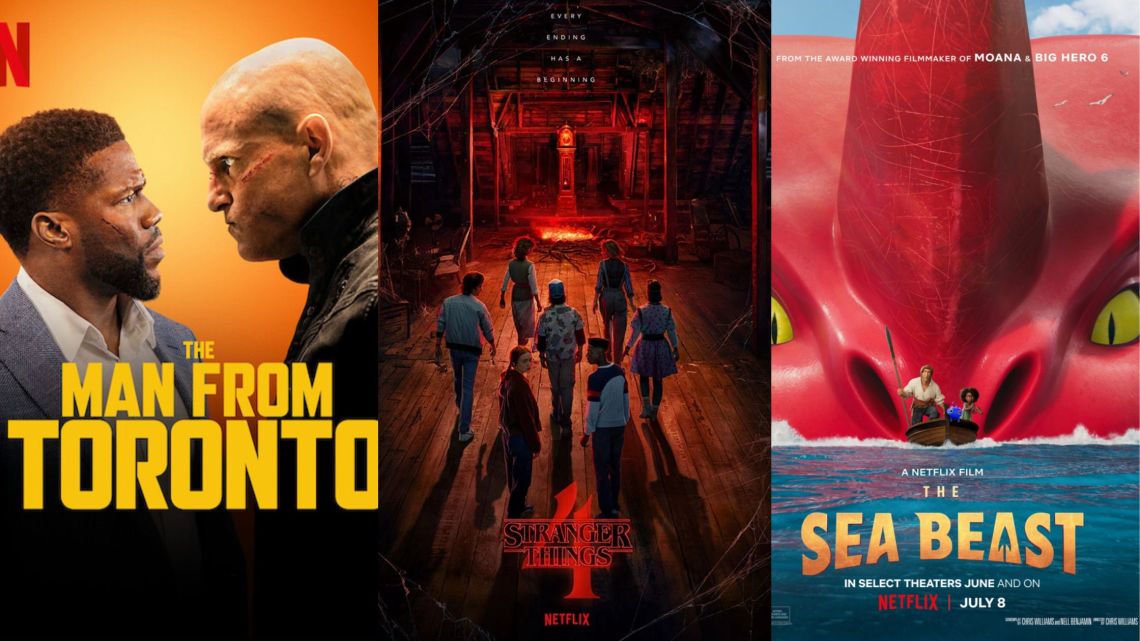 As we approach the end of July, there are a few shows that have emerged as the most-watched shows on Netflix. This month, we’ve got a mix of new and old favourite.

The streaming giant has produced some of the most popular shows in the past few years, and it shows no signs of slowing down.

I don’t think out of all the streaming platforms, Netflix has any competition when it comes to bringing original movies and series to its audience.

They keep adding new shows and movies every week and keep updating their data on trending searches, popular movies and series and so on.

Contents hide
According to the Netflix’s data, here is the list of most-watched shows on Netflix in July 2022.
Stranger Things Season 4
The Umbrella Academy
All of us are dead
Boo, Bitch
Alone
Peaky Blinders
Most-watched movies on Netflix in July 2022
Girl in the Picture
The Sea Beast
The Man from Toronto
Sing 2
Hustle
Bhool Bhulaiya 2
RRR
Share this:
Like this:
Related

According to the Netflix’s data, here is the list of most-watched shows on Netflix in July 2022.

The Duffer Brothers ‘Stranger Things’ came back with a huge expectation and ambition. It is certainly the most-viewed show on Netflix for the month of July 2022, with an average of 1.8 billion hours viewed, which is massive.

The 80s fantasy horror genre series has a great number of fans; it seems, throughout the world.

Season 4 is epic in many ways. The stories remain rooted to the character. Eleven, Vecna and Max are the prominent characters in this season and delivered beyond expected.

We see scenes that bring tears and scenes that literally make us scream in fear and utter excitement.

Every time when the grotesque hands of Vecna touch the forehead of the victim, it’s the most unfortunate death it shows.

The ending certainly didn’t feel like a cliffhanger. Although we could raise a few questions, that may be the turning point in the story for the next season.

In a nutshell, the Netflix original series has been the trending search on Netflix. ‘Stranger Things season 4 remains in the top 10 for 7 weeks straight.

According to Netflix, ‘The Umbrella Academy’ has been in the top 10 for 3 weeks now with an average 124 million hours views.

Although the series may not continue to dominate the Netflix chart for long but it is certainly the most-watched series on Netflix right now after Stranger Things.

Since its release, The Umbrella Academy has been watched by millions of Netflix subscribers around the world.

All of us are dead

The zombie apocalypse K-Drama ‘All Of Us Dead’ hit the list of no. 1 on Netflix when it got released. After Squid Game, this is the second K-Drama that got successful in a global platform.

The series has garnered approximately 124 million hours of viewership in a week. Even in July 2022, people are watching the series widely.

Netflix’s new ‘Boo, Bitch’ aims towards the ever-elusive adolescent. It is a dark comedy that follows the lives of three friends who are struggling to make it in the world of online beauty blogging.

The series is currently ranking in the number 5 in US. Has it stayed on the top?

Not in most of the countries, though.

But, if you see the data of July, Boo Bitch has quite the number of viewership, I guess. Netflix hasn’t yet released the exact figures.

Netflix’s reality show ‘Alone’ is the next in the ranking. The show focuses on 10 individuals competing for survival in an isolated island for the longest.

It has now climbed into the number-two spot on the streaming site’s list of most-watched shows.

The series is highly popular in UK.

Most-watched movies on Netflix in July 2022

Girl in the Picture

The documovie is the most frightening movies ever created by Netflix. The true story of child abduction that reveals horrifying secrets and violence. The show is only meant for adult.

However, it is a hit movie with the viewers and has been in the top 10 for a week now with around 28. 38 million hours viewed.

Netflix’s ‘The Sea Beast’ has been in the top since its release with 33. 52 million hours viewed. The movie is a sea adventure magical tale of Jacob, a legendary sea monster hunter whose life is turned upside down when he met with a young girl. The animated movie has captured the audience’s interest and till now it is a successful venture.

The Man from Toronto

The recently released Netflix film ‘The Man From Toronto’ is a solid addition to the action-comedy genre. Watching Kevin Hart on screen is always fun and together with Woody Harrelson, the combination rocks.

The two talented performer has made it worth the watch and continued to top the chart for 3 weeks now with an average 24.38 million viewership.

The SING franchise movie has entered the Netflix’s top 10 list is a bit of a surprise. People are watching the movie and the number of hours are kept adding. It is one of the highest grossing animated film of 2021 and now taken the spot shortly after its Netflix arrival.

Sing 2 continue to be in the top for 3 weeks, with an average viewership of 16.58 million hours viewed.

According to Netflix’s data, the Adam Sandler feature film ‘Hustle’ is one of the most viewed film the week it got released at 84.58 million hours. Certainly, one of the best in Adam Sandler’s career. The movie continued to dominant for 5 weeks.

The movie has added a lot of interesting element to be interested in.

Adding the non-English movie that continued to rule for a few weeks in the top 10 is the Hindi movie ‘Bhool Bhulaiya 2.’ The movie became a massive success with an average 12. 29 million hours watched on Netflix for two straight weeks.

The movie has said to be a roaring hit in the box office crossing 100 crore collection.

Rajamouli’s period action epic film ‘RRR’ has created a whole new buzz in the country. People gone crazy about the massive success of the film. It is by far one of the most popular film from India on the streaming platform globally.

According to the reliable sources, the movie has been viewed for over 45 million hours. Ever since the movie got added to the streaming platform, it continued to rule in the top 10 positions for 8 weeks.

Even though it’s been months now from its release, people across the globe still love re-watching the pan India movie.