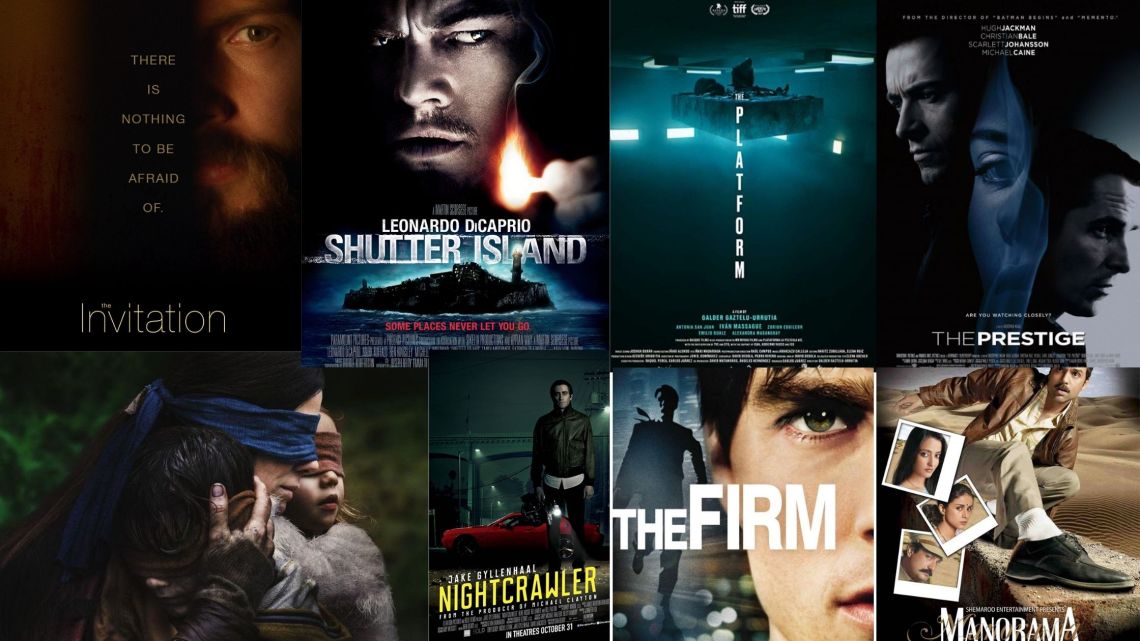 Over the past few months, Netflix has added several original movies, series, and other content genres. Last year, streaming platforms like Netflix, Amazon Prime Videos, and Disney+Hotstar were great sources to keep us all busy and entertained during the lockdown.

Though I have been so much preoccupied with other works for the past few months, I hardly find time to watch something. However, the weekend is when my husband and I both detox ourselves by binge-watching, house cleaning, and cooking.

Here, I want to share some best psychological thrillers on Netflix to stream that I have watched for the last couple of months.

Though several amazing thrillers are streaming on different platforms that I will share on some other posts.

Contents hide
Best Psychological Thrillers on Netflix
The Platform
Mirage
The Killing of a Sacred Deer
Perfection
Velvet Buzzsaw
Run
Nightcrawler
The Invitation
Shutter Island
The Prestige
In the Shadow of the Moon
Hypnotic
Bird Box
Behind Her Eyes
Burning
The Roommate
Dark
Hannibal
Fractured
The Firm
Manorama Six Feet Under
Conclusion
Share this:
Like this:
Related

The thriller science fiction movie “The Platform” is an unusual mind-blowing movie. It is beyond a traditional frame of filmmaking that provokes our minds towards suspense and gory theme.

The story revolves around a man in the prison designed in a tower format where prisoners are fed from top to bottom in a system.

The prison and the tower format denotes the society where we live. What it shows is disgusting but the raw truth of the human psyche.

“Mirage” is another Spanish-language one of the best psychological thrillers on Netflix about space-time travel. The story revolves around a missing kid and how the lead character Vera fixes her past with the present.

It is a collaboration of themes like a sci-fi thriller, parental emotions, and relationships. I watched this film long back, and I could recommend it if you like thrillers.

The Killing of a Sacred Deer

The Killing of a Scared Deer is a 2017 psychological thriller film directed by Yorgos Lanthimos.

It’s a dark and twisted plot about a wealthy surgeon named Steven Murphy whose settled life disturbs when the mystery of a teenage boy Martin unravels as the investigation started. Yorgos Lanthimos is a great director who has made some great movies like The Lobster, The Favourite.

I couldn’t possibly say how terrific is the Netflix film “Perfection.” When it comes to thrillers, this Netflix original has nailed the genre.

There are unnerving twists and turns in the story that you will not expect; rather, the ending is the best. It is a story of two amazing young cellists who had different life journeys and stories. I care less to disclose the story here as I want you to watch and get amazed.

I have watched several movies of Jake Gyllenhaal, and he is one of the most prominent actors in Hollywood. In the Netflix original “Velvet Buzzsaw,” he played an art critic.

The story has a gory and cannibalistic approach with a hint of humor. I wouldn’t say the best of all thriller movies, but it is one of the best on Netflix.

If you a fan of Jake Gyllenhaal, you would want to watch along with his popular and the best thriller movie “Nightcrawler.”

If you are looking for an American psychological horror film on Netflix, you could watch ‘Run’ which tells the story of a mentally disturbed mother who lost her only child just after birth. In shock, she kidnaps a baby from the hospital, raises her as her own daughter but kept her under heavy medication so that she couldn’t run. What happens when the daughter Chloe finds out her dark secrets?

Indeed, “Nightcrawler” is the best psychological thriller on Netflix and of all thriller movies. It tells the story of a small-time criminal who makes money by capturing videos and photographs of active crime scenes.

Jake Gyllenhaal has given his best performance in this film; his dialogues, expressions, and sociopath behavior will scare you while watching the film. It lets you engulf your mind for a while. For the thriller genre fan, you shouldn’t miss this.

I watched Netflix’s “The Invitation” because I was looking for a good horror movie. This movie took me out of curiosity. The first 30 minutes of any film is important. It determines if it is an engaging film or not.

“The Invitation,” like the name suggests, starts with a get-together at the house of a couple where couples are laughing, drinking, and celebrating. It makes a suspenseful momentum that something isn’t right about the invitation.

It is a non-traditional horror movie on Netflix that you can watch; also, it can be categorized under psychological thrillers.

The list will be incomplete without mentioning Leonardo DiCaprio in the lead film “Shutter Island.” Martin Scorsese’s “Shutter Island” has gained popularity because of several reasons.

The unparalleled performance of Leonardo DiCaprio, screenplay, dialogues, cinematography, thriller – suspenseful theme, it is a compact film that won’t bore you even for a second.

This is my husband’s favorite movie, and it is he who suggested me to watch it. I liked it so much that I ended up watching it twice to understand it.

Indeed, it is one of the best thriller movies of all time.

The 2006 mystery thriller film of Christopher Nolan’s “The Prestige” is one of the best films of the 2000s. While watching the movie, one has to use his/her brain to understand as every scene is interlinked.

The film is also a landmark for many directors as it blends the mystery, drama, suspense, thriller, and fantasy all together perfectly.

Both the actors Christian Bale and Hugh Jackman, performed phenomenally. The movie is all about illusion, tricks, and competition against each other, sabotaging each other in the end.

Thankfully, the film is still streaming on Netflix.

In the Shadow of the Moon

“In the Shadow of the Moon” is a mystery genre thriller film that revolves around a police officer tracking a serial killer. While investigating, he unwinds many truths that he is unaware of.

It is an unconventional serial-killer investigation film with twists and turns taking place in the plot.

I really liked the film and would recommend my readers to watch it.

Just around the Halloween, Netflix releases a psychological horror film ‘Hypnotic’ which features Kate Siegel in the lead. The story is about a depressed young woman seeking help from a hypnotist.

Little did she know that she has been hypnotised and controlled by the doctor outside the room as well. She fought hard to disengage her mind from the doctor’s lethal mind manipulation game.

Though many wouldn’t agree, I find Netflix’s original thriller film “Bird Box” is an amazing thing to watch. There are no limitations in suspense, thriller, and spine-chilling horror.

It is a modern take on horror filmmaking where unlike classic horror films like Ring, Insidious, you wouldn’t find any ghost, but the sequences are scary enough to make you jump out of your bed.

Netflix has recently added a new thriller on its list, “Behind Her Eyes,” and I was shocked after watching it till the end. It had the most unexpected twist in the end that I couldn’t think of.

In fact, I found many viewers tweeted the same about the ending. The limited series got mixed reviews, but I loved it thoroughly, and you should stream it.

I dare not to reveal the plot but can say it will hook you up till the end.

Burning is streaming on Netflix, which is a psychological thriller with an amazing storyline and performances.

According to Decider, ‘Burning’ is one of the best overlooked films of 2018. The film captures the social inequality in South Korea with a hypnotic and much haunting storyline.

I watched “The Roommate” during my college days. I remember a friend of mine downloaded it and passed it on to me on a hard drive. It is also a psychological thriller that revolves around the college campus where college freshman Sara realizes that her new weird roommate stalks her and is obsessed with her.

It is not at all scary, but some scenes might make you feel uncomfortable. I wouldn’t say the best thriller movie, but one of the thriller films you can stream on Netflix.

With an IMDB rating of 8.8, the German psychological thriller series “Dark” is confusing, layered, suspenseful, and there is no shortage of thrilling factors.

When the series got released, it had created a massive buzz on the social platform. People worldwide were going crazy with all the labyrinth of secrets, time travel, and revelations.

My husband and I have watched the two seasons of the series and were amused but mostly shocked with all the twists and turns of each character’s past, present, and future.

Another psychological TV series on Netflix that I feel is one of the best thrillers to stream. The plot revolves around an FBI criminal officer and a forensic psychiatrist Dr. Hannibal Lecter who plays with his victims’ minds. It is a magnificent series that shows drama, crime, and psychological thrillers.

I haven’t had the chance to watch the last season but based on watching the first two seasons, I could pretty much say it is a quite gripping series to watch.

Netflix’s Original movie “Fractured” is an engaging film where the story revolves around a family husband, wife, and daughter. The story hooks you in a heavily emotionally broken family story where the father is looking for his daughter admitted to the hospital after an accident.

It is a thriller film as the film continues its layers, getting peeled off and reveals an unexpected turn in the story.

Tom Cruise in the lead 1993 thriller film “The Firm” is an amazing film I watched a few weeks ago with my husband. The story revolves around Mitch, a recent law graduate who got hired by a big law firm.

He joined the firm and enjoys getting all the perks provided by the firm. But as he continues, he and his wife felt something isn’t right about the firm.

Like any Tom Cruise movie, this film doesn’t have many fight sequences, but the storyline is so engaging, especially the young tom Cruise is a treat to the eyes.

“Manorama Six feet Under” is one of the most underrated Hindi movies which deserve to be watched by the audience. The film features Abhay Deol in the lead, investigating a case; he uncovers several hidden truths while doing so.

It is a classic noir genre of the film highly inspired by the films of Roman Polanski. It isn’t like any other Bollywood film wraps with a number of songs and glitter. The movie has a simple setting with a sole focus on narrating an engaging and interesting story.

Above are the 21 thriller movies that I have enjoyed watching and recommend you watch if you are looking for a similar genre.

I keep updating all my contents from time to time. 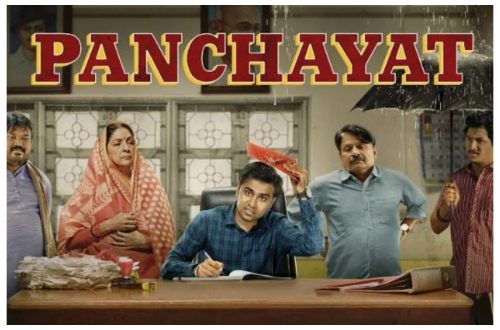 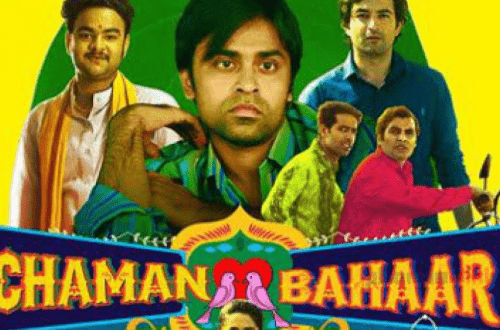 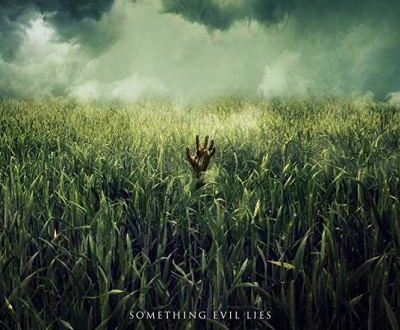